In the first weekend of July once again the yearly game designer convention was organised in Göttingen. The SAZ has taken on the organisation and the location changed to the Lokhalle. Together with a fellow designer and a game illustrator we participated on Saturday. Time to look back (for more tips and tricks see this blog on a visit 2 years ago).

Some rough numbers: around 160 designers were present and around 80 publisher representatives. Some publishers were represented by 3 or more, while other publishers had 1 scout that stalked the hall. There were also agents, who scout for prototypes they then pitch to publishers all around the world. It was a very productive event for us, getting interest in many of the prototypes we brought.

In short: preparation and representation will lead to better meetings! 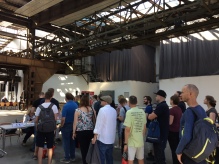 Based on our experiences this is a really good event to pitch and to network. Once you have established a lot of contacts with publishers it might be less needed to go there. However even ‘big names’ are there to pitch (Friedemann Friese, Michael Kiesling). That is actually what makes this event more special: first time designers and veterans are there, all passionate about games and their newest concepts.

This was our 3rd visit and we each brought more different concepts and improved our preparation. In the end all our prototypes got some publisher interest, actually. Of course, the path from interest to publication is perilous, so we’ll see what comes out of it. It is encouraging for sure.

This site uses Akismet to reduce spam. Learn how your comment data is processed.